Understanding ethanol: What is it?

If you drive a gas-powered vehicle, chances are, you’ve seen the word “ethanol” at the gas pump. In fact, more than 98% of United States gasoline contains ethanol. But what exactly is ethanol, and how is it used within the transportation sector? Let’s go through some commonly asked questions surrounding ethanol and its uses.

Ethanol is a colorless volatile flammable liquid that is produced by the natural fermentation of sugars. While ethanol is frequently used in alcoholic beverages, it also has proven to be an effective form of transportation fuel. This is in part because ethanol has a higher octane number than gasoline, meaning that it can help prevent engine knocking and maintain vehicle driveability for a longer period of time.

Where is ethanol produced?

Most ethanol used in the United States is produced domestically, mostly in the Midwest and Upper Midwest, where there is a large amount of corn and resources such as water. Here, ethanol plants utilize either dry or wet mill processing (largely dry mill) to ferment the inputs into the final product. The ethanol production process also creates the by-product of distillers grain, which can be utilized as livestock feed.

When did ethanol begin being used?

Ethanol has been used for quite some time – in fact, ethanol was first used to power an engine in 1826. It continued to be a popular form of fuel throughout the early 1800s, but its use decreased significantly when it began being taxed as liquor to help pay for the Civil War. In the 1970s, ethanol began to gain popularity once again due to concerns over the environmental impacts and cost of petroleum-based fuel.

How frequently is ethanol used in gas?

Almost all gasoline sold in the United States contains a small percentage of ethanol. This gasoline is referred to as E10, because it contains 10% ethanol and 90% gasoline. Because E10 is so common and can be used in any type of vehicle, it does not have a separate pump at the gas station. Higher blends of ethanol, such as E15 or E85 have their own separate pumps.

What cars can use ethanol?

Any vehicle can run on E10, and many newer vehicles can run on E15. However, Flex Fuel Vehicles (FFVs) are capable of operating on any blend of gasoline and ethanol up to 83%. This blend is known as E85, and it contains 51-83% ethanol. Flex Fuel Vehicles are very similar to other vehicles, but they sport an ethanol-compatible fuel system and a different powertrain calibration. In fact, because Flex Fuel Vehicles are so similar to other vehicles, many drivers don’t even realize that their car is an FFV. This is especially because FFVs can also run on regular gasoline, and drivers simply have the option to use a higher ethanol blend if they choose.

Is ethanol bad for my car?

There are a couple of considerations drivers should keep in mind before choosing to use high blends of ethanol such as E85. First of all, ethanol has a lower energy content per gallon than gasoline and also burns faster, meaning that when using ethanol, drivers may get slightly lower fuel economy. Additionally, drivers should be careful to only use high blends of ethanol if they own a Flex Fuel Vehicle or have otherwise thoroughly researched their vehicle’s compatibility with ethanol. When used in older vehicles or those that are not meant to run on ethanol, higher blends can cause engine damage.

Is E85 more expensive than gasoline?

While ethanol is typically slightly more expensive by the mile, it is cheaper than gasoline per gallon. Prices can also vary significantly based on geographic location. In Tennessee, the average price of E85 is currently $2.97 per gallon, which is much lower than that of gasoline. Drivers can find the price of ethanol near them using the E85 Prices website, which also features an app for download as well.

Where can I purchase E85?

In Tennessee alone, there are over 80 gas stations that sell an E85 blend. There are multiple of these stations in Nashville, Clarksville, Chattanooga, and Murfreesboro, as well as stations distributed along most major interstate highways and in some rural areas as well. Drivers can view available E85 stations and even plan out stations available along a route on the Alternative Fuels Data Center’s Interactive Public Stations Map.

How is ethanol regulated by the government?

The government mandates that all gasoline containing ethanol is labeled at the pump. For example, many gas pumps will have a sticker similar to the one below letting consumers know that gasoline is E10. 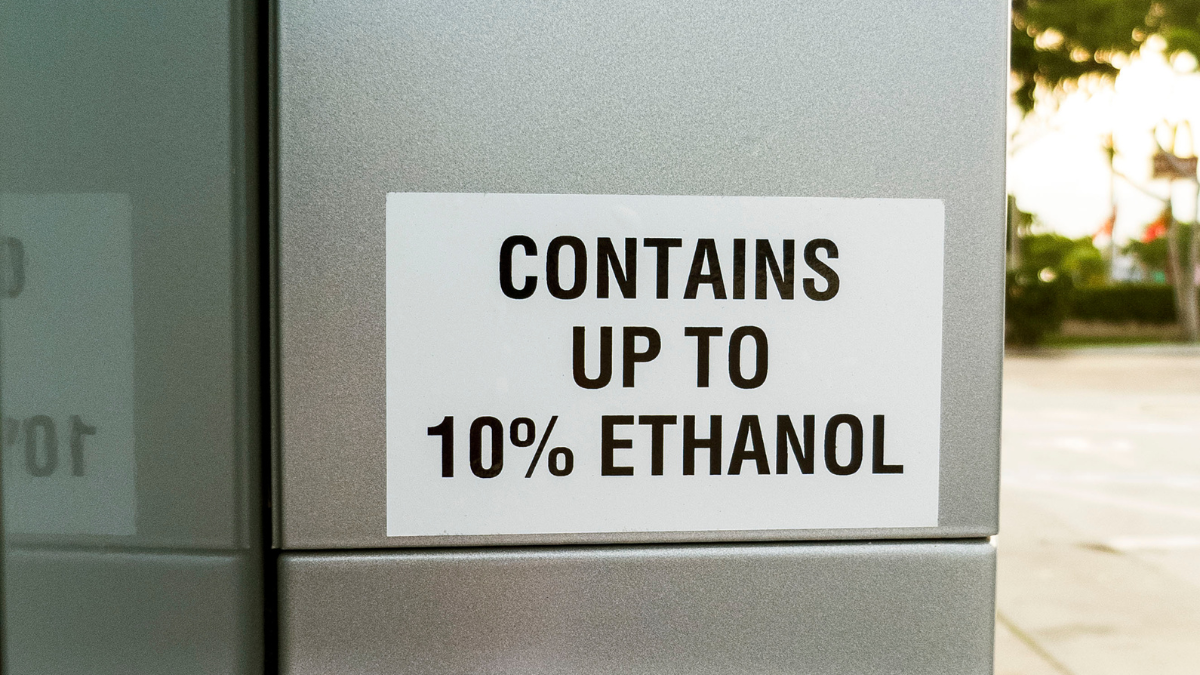 Furthermore, the government has encouraged the production of ethanol through legislation, one of the most significant pieces of law being the Renewable Fuel Standard (RFS). The RFS Program was created under the Energy Policy Act of 2005 and required an increase in the sale of renewable fuels, including ethanol. This legislation provided a large push for the expansion of ethanol from 2005 until the present day.

What are the benefits of ethanol?

There are several benefits of ethanol that drivers might consider, especially when thinking about purchasing a Flex Fuel Vehicle.