The Tennessee Green Fleets Certification Program was developed jointly by East and Middle-West Tennessee Clean Fuels, Tennessee’s two Department of Energy Clean Cities Coalitions, with the goal of recognizing the exemplary work of fleets who are working towards alternative fuels adoption and emissions reduction. It utilizes performance-based metrics to analyze any fleet’s vehicle and fuel-use data and compare new actions they have taken to what their footprint would have looked like without those actions.

A points-based, three-star system allows for certification at the 1-, 2- or 3-star level. The Tennessee Green Fleets program encompasses all fuel and technology options including biodiesel, natural gas, propane, electric, ethanol, hybrid, idle-reduction and fuel economy strategies such as car share, vanpooling, truck stop electrification, as well as non-automotive forms of transportation like bicycles and shooters. The applicant fleets that receive certification can promote their fleet’s greening efforts and include the certification status in their sustainability portfolio information.

Tennessee Green Fleets’ five newly certified fleets prevented a combined 972.7 tons of CO2 emissions from being released into the atmosphere in 2018. That tonnage does not include the emissions reductions from the 20 fleets certified from 2016-2018.

The entire fleet of shuttles and buses that ABM Aviation operates at the Metropolitan Nashville International Airport (BNA) – 28 buses and shuttles – runs on compressed natural gas (CNG). ABM efforts began several years ago in working with the airport to determine the best fuel to use for handling many passengers everyday and their movement needs to and from short- and long-term parking lots, terminals, and car rental facilities. ABM Aviation also operates a large CNG station literally in the middle of the airport for refueling the fleet. The ABM staff have also participated in First Responder alternative fuel vehicle training in the area, and have brought vehicles to events where Tennessee Clean Fuels is working to showcase regional efforts.

An ABM full-size bus that operates on CNG providing service to visitors to the BNA airport. 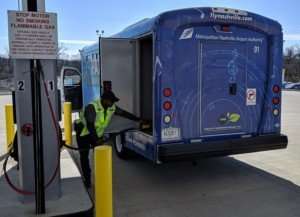 An ABM shuttle refueling at the CNG station.

A photo of the CNG station that ABM manages at the site. 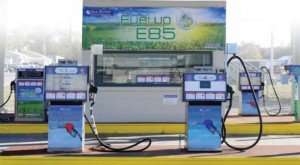 The main refueling center at ORNL for its vehicles, where E85 and B20 dispensers are front and center. 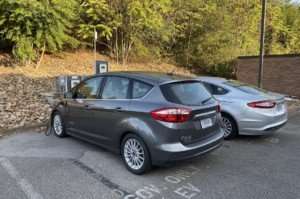 Thirty-one of Waste Management’s fleet of forty-six vehicles in Jackson, Tennessee run on CNG with the majority of the remaining vehicles being smaller pickup trucks (not large refuse trucks). In 2018 alone, WM’s Jackson Fleet reduced CO2 emissions by 296 tons. This is the second site of Waste Management in Tennessee that is moving to almost all CNG-powered refuse trucks (Antioch, TN, just on the south side of Nashville, was the first). WM has been a tremendous partner to Tennessee Clean Fuels and other entities across the state as they have assisted in numerous education efforts surrounding CNG and alternative fuels over many years, including offering tours of their facilities in Antioch and Jackson.

WM officials in Jackson provided a tour in 2018 of the site and explained what kind of changes exist in a CNG maintenance facility… including less soot from diesels.

The CNG equipment that powers the site – gas drying, compression, and storage.

The “Tennessee Golf Trail” consists of nine golf courses across Tennessee that are part of the state parks system in Tennessee. The golf courses extend from Warriors’ Path State Park near Kingsport to Montgomery Bell State Park that is about an hour west of Nashville. Over the past years, the golf course management team has been replacing gasoline-powered carts with electric carts, and now has eliminated the use of gasoline in all 650 of the carts used at all nine of the course locations. The Tennessee Golf Trail has taken leadership actions in other phases of their golf course management, including starting the process of replacing the gasoline and diesel greens mowers at Harrison Bay State Park Golf Course with all-electric mowers. 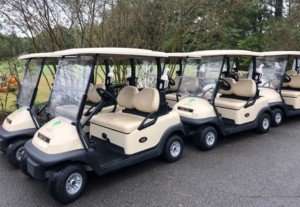 A line-up of Tennessee Golf Trail electric carts at a golf course. 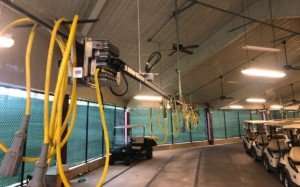 A photo of one of the installations of the overhead charging system that makes it easier for the parks to plug them in and not have electric cords running all over the garage. 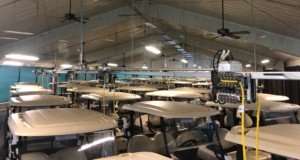 Many electric carts plugged in overnight for use the next day.

Clean Sweep, Inc., is a stand-out example of how alternative fuels can be used in many unique applications. They run a fleet of sweeper trucks out of Chattanooga, and three of the fleet’s 10 trucks run on propane autogas (LPG). They replaced aging diesel sweepers with gasoline sweepers that were then converted to run on propane. Clean Sweep is a partner for outreach, and just finished showcasing one of their sweepers at the 2019 Southeast Diesel Collaborative meeting in that was held in September 2019 in Chattanooga. ICOM North America was their conversion partner.

Photo of one of Clean Sweep’s three propane-powered street and parking lot sweepers that was being shown to attendees of the 2019 Southeast Diesel Collaborative’s 14th Annual Meeting held in Chattanooga in September 2019. 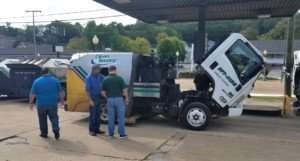 Clean Sweep began their process in 2017. This included a) replacing older diesel sweepers with new gasoline-powered sweepers, then b) having those gas-powered sweepers converted to run on propane autogas. ICOM North America was the selected converter and this photo shows ICOM staff helping Clean Sweep owner Pete Phillips decide on where they would place the propane tank on a new gas sweeper. 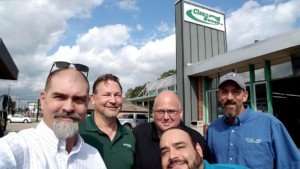 Pete Phillips, owner of Clean Sweep, Inc. in Chattanooga (second from left), posed with ETCleanFuels and ICOM North America staff outside his facility in Chattanooga in 2017 at the beginning of the conversion process.

http://www.TNCleanFuels.org – The Middle-West and East Tennessee Clean Fuels Coalitions are both nonprofit 501(c)3s working proactively with fleets across Tennessee to reduce dependence on petroleum and improve air quality and sustainability. The two coalitions are part of the DOE Clean Cities Program and respectively serve the western and eastern halves of Tennessee. They work to develop partnerships that assist fleets in meeting their goals toward implementing petroleum-saving technologies and fuels.